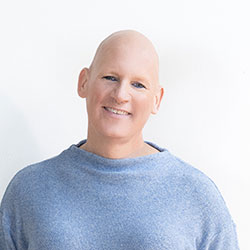 Steve Peterson always wanted to follow in the footsteps of their father, an Elkhart Pediatrician, and work in a medical field. But with a distaste for the sight of blood, Steve decided to go another professional route.

After earning their A.A.S. at Southwestern Michigan College and their B.S. at Ferris State University, Steve ventured into the world of automotive manufacturing and business ownership. Steve owned and operated multiple bicycle stores across Michiana from 2008-2020.

In 2017, Steve discovered Mosaic and became a patient, continuing a period of self-discovery. This eventually led Steve to sell his bike businesses and transition onto the administrative team at Mosaic.

Steve now gets to relive some of those childhood dreams of working in medicine while using the set of skills they developed earlier in their career.

My experience working with Dr. Bast and Jenn Faulkner-Jones as a patient helped me discover a part of myself that I had denied for over 40 years. The happiness and joy that has come back into my life has been missing for decades and I am a much more connected, healthier human thanks to Mosaic.